Oops! probably shouldn’t be part of any blog about thoracic surgery – but I say – “Oops!” because as I look over some of my writing – I see that I have definitely fallen into old habits (of writing reviews).  But I won’t fight my natural tendencies – and just maybe, when we get done – there will be another ‘Hidden Gem’ for my loyal fans..

Long, wonderful day in thoracic surgery – which started at the Hospital de la Familia, a private facility on the outskirts of Mexicali by the ‘new’ border crossing.. It’s way out on Avenue Maduro (after it changes names a couple of times) in an industrial area.  But – like most of the private facilities I’ve seen so far in Mexicali – its sparkling, and gleaming with marble floors, and plenty of privacy for the patients..  Don’t worry – I’ll be writing more about this, and the other private hospitals in Mexicali soon.. 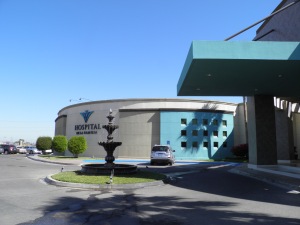 While I was there – I got to see Dr. Octavio Campa again.  He’s an anesthesiologist – and a pretty darn good one (and if you’ve read the previous books, you know I won’t hesitate to mention when anesthesia isn’t up to par, either.)  This picture* should show you exactly why I am so fond of him – as you’ll note, he pays very close attention to his patients, and their hemodynamic status.

This is my second time in the operating room with Dr. Campa – and both times he has consistently shown excellence in his care of the patient.  (He’s pretty skilled with a double lumen tube, which helps.)

(if you want to contact him to schedule anesthesia for your surgery – email me.)

Dr. Campa was born and raised in San Luis, Mexico. In fact, along with Dr. Gabriel Ramos – he’s known Dr. Ochoa for most of his life.  After completing his medical education, he did a three-year residency in Anaesthesia, and has been practicing for seven years.

Prior to starting the case, he started a thoracic epidural for post-operative pain control – using a nice combination of Fentanyl and bipivicaine, so this should be fairly comfortable for the patient when (s)he wakes up.   A lot of anesthesiologists don’t like performing thoracic epidurals (it’s an extra hassle, and takes more skill than a standard lumbar epidural) but I am sure the patient will appreciate the extra effort.

Dr. Vasquez, the cardiac surgeon joined us in the operating room today.  It was nice to see him.  I posted a picture of him in his surgical regalia so everyone will be able to recognize him when I interview him next week.

Dr. Vasquez (left) and Dr. Ochoa at the end of another successful case.

I can’t (and won’t) tell you much about the individual cases but I did get some great photos to share today.. (It’s too bad – because I always meet the most interesting people – disguised as ‘patients.’  But it wouldn’t be fair to them.)

* I don’t believe in ‘staged’ operating room photos – what you see is what you get – sometimes the photos aren’t perfect, because I take them while people are working – but I don’t want to add any artificiality to the scene.  Of course – the casual, between cases photos are a little different.

a more casual photo now that the case is over.. Dr. Vasquez, Dr. Campa and Dr. Ochoa

I promised everyone more photos – so don’t worry – I still have a lot more to share.  This is one of my favorite ones of Dr. Ochoa – he’s notoriously hard to get ‘good’ photos of – because he’s always in action, so to speak – so a lot of the operating room photos don’t always capture him well.

After the first case – we headed over to Mexicali General – where I was able to get some more pictures of my friends.. However, this photo below – is probably my favorite that I’ve taken in Mexicali so far.. (Which is surprising because: a. it’s not a surgery photo and b. I had to set aside some of my ego to even post it.)

But then again – no one is going to look good in a photo next to Carmen – she’s a stunningly beautiful woman – even after an evening in the operating room.  Carmen is one of the circulating room nurses at Mexicali General – and she’s pretty awesome – in addition to having these amazing expressive eyes that peep out from behind the surgical mask.  I really enjoy talking to Carmen – because at the end of the day – whether I am taking on the role of medical writer, photographer or student – I am a nurse, and I always enjoy talking to other nurses and hearing about their work, and lives. (I know there is a great book there – a compilation of nursing stories from around the world – but try getting a nurse to slow down for five minutes for an interview..)

with Carmen, a circulating nurse at Mexicali General

Of course, I couldn’t end my post without more pictures of my two favorite people; Lalo and Jose Luis.. 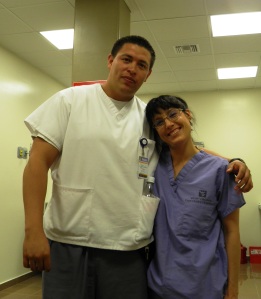 I like standing next to Jose Luis – besides being a fabulous guy – doesn’t it make me look thin??

For the last photo today – I’ve got a great, dramatic action photo of Lalo.. You can’t really see – but he’s throwing sutures in this picture – and I just think it will be a great photo for him to have when he’s a practicing cardiac surgeon someday.

2 thoughts on “Great day in thoracic surgery and oops!”