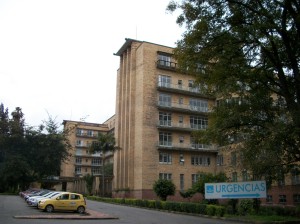 So, I was really excited to head out to Hospital San Carlos.. It’s an older hospital – out in the south part of Bogotá, set apart from the city by verge of being in the midst of a park.. It’s where they film “A Corazon Abierto” which is one of my favorite programs here (or was, while I had a tv to watch.. along with RCN news – which is fantastically dramatic..)

But when I got out there, security informed me that no tours on the weekend, and no, I could not come in.. So I peeped in windows, and wandered the grounds. It’s an interesting place, several of the windows I peeked in looked like old storerooms and had equipment that must have dated from the originally opening.. It’s an art deco building, but it definitely has a gothic feel – great place to film one of those B movies about murderous patients in a haunted sanitorium.. (except of course, for all the pretty landscaped flowers, LOL) so much for my active imagination..

Wish I could tell you more – but unlike many of the security guards I’ve encountered – there was no charming this one..