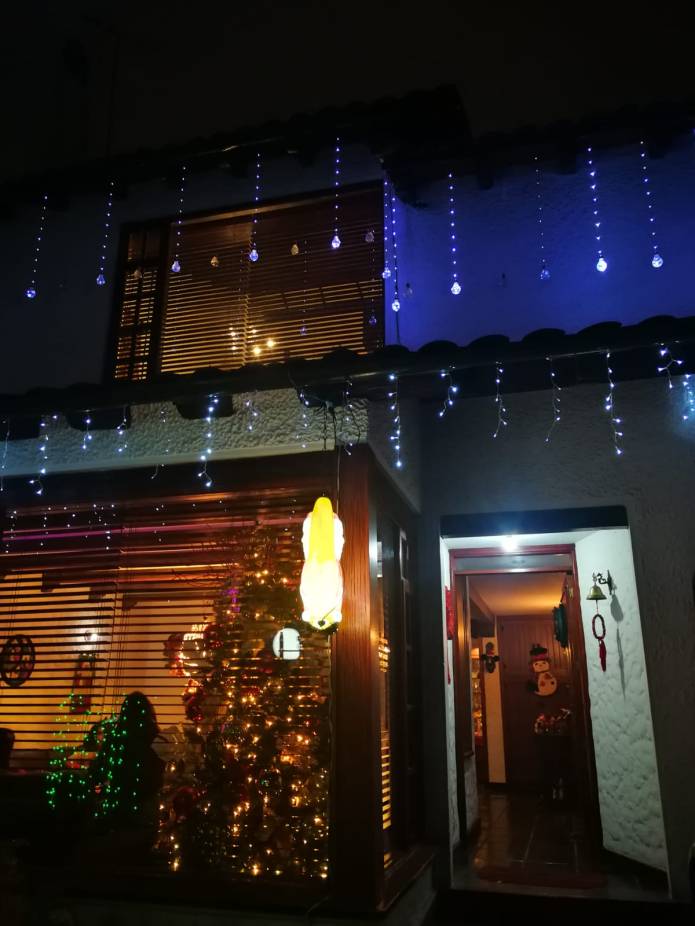 Obviously, people are unique, and there are good and bad people etc.. everywhere. But I have found my Colombian friends, acquaintances, neighbors, and even many many strangers to be some of the nicest, and kindest people I have encountered. I would have never been able to write the books, if that hadn’t have been the case. Before smart phones (and related technology), and speaking very minimal Spanish, I was able to navigate, research and write several books about this country, all due to the countless times absolute strangers helped me out, whether I was lost in the far part of town, needed to complete a task complicated by complex instructions, or just needed additional information. There was always someone that volunteered to help. Many of these people went on to become close friends, or colleagues. But sometimes, it was just a stranger on the bus who was giving me directions to where I needed to go.

Of course, there are nice and helpful people in the United States – I always tell people, that in general, “gringos” are friendly and welcoming to strangers. And the rest of the world, has no shortage of nice people either. But it’s more than that – here there is a sense of family and inclusion that we seem to have lost in the United States. When I was a child, during the holidays, families (like mine) always invited visitors, strangers, single people etc. to join us – and celebrate with us. But much of that sense of inclusion has diminished over the last several decades.

Where my parents would invite people to picnic with us at one of our soccer games, etc. my generation is more closed off – our immediate nuclear family becames a secret club. Instead of saying, “I can’t do lunch because of my child’s X activity, but would you like to sit in the stands with me so we can catch up?” people have become exclusionary – and often times, pretty darn proud of it. It becomes almost a badge of honor among young adults to start excluding even very close friends once you marry and had children.

It’s more like, “Look at how special I am – I have a spouse, and kids, [and thus don’t have time for you].” I am not the first to remark on this phenomena, there has been miles of articles, books and literature written about it. It ties in with the helicopter parenting and other childrearing trends that are more prevalent in North America. This anti-social, narcissistic trend probably isn’t entirely absent in Colombia – but it’s not common. So, in Colombia, at least, your friends with kids are still your friends and vice versa..

Thus, for someone like me – who likes to travel (and likes to travel alone) and live a very independent life – being able to maintain friendships with people, and being able to include them in my life and theirs, despite their childbearing status is important. (I love my friends, and even though I don’t have kids of my own, I enjoy being around children, especially when they get to that fun pre-teen age).

But during the holidays, these trends tend to be enhanced, which is why they talk about the depression and risk of suicide during the holidays – in the USA – because we have a lot of lonely people being left out of a lot of socializing for superficial reasons (like divorce, widowhood, or single status) even before the pandemic turned our world upside down.

But let me give you a recent example (just one of many many experiences I have had) and tell you about my Christmas – because maybe it’s better to just talk about actual events – instead of sociology theories..

Of course, let me acknowledge, that the Holidays in Colombia are a very special time anyway.. It’s not about a bunch of presents under the tree or buying a lot of stuff you don’t really need. Colombia is a Catholic nation – and religion is definitely part of it – but not overwhelmingly so. (I am not terribly religious – and none of it makes me uncomfortable here – which means something; when you consider that many times at home in the USA – I can’t get through a business meeting without someone feeling the need to invoke Jesus, repeatedly, in a lengthy and aggressive manner, whether or not it’s appropriate.)

Christmas, New Year’s and the Holiday season is a time to celebrate – with friends and family. It’s a time for homemade cooking, exchanging hugs, stories and spending time together. It’s gotten more complicated recently – but this year, everyone was vaccinated – and boosted – and several of us remained masked too (with doors and windows open for extra ventilation).

This year, 2021, my neighbors, the Gonzalez family invited me to join with their big, boisterous, lovely and sweet family for Christmas. I moved here in the middle of the pandemic – with strict lockdown rules in place – so I didn’t really know my neighbors well – only enough to share greetings in passing. We had exchanged holiday greetings and neighborly gifts (they gave me a lovely anchete (gift basket), and then they invited me to spend time with their family.

I learned a long time, when I first came to Colombia – to say yes to these opportunities. (When I was new to Colombia, I would often say no because I didn’t want to be “a bother”, or inconvenience anyone. I thought saying yes was bad manners – so sometimes, I turned down invitations to do things that I really wanted to do because I thought people were just inviting me to be nice – and again, I didn’t want to inconvenience them…. and then a nice Colombian girl I knew explained that by turning down invitations, people got the impression that I wasn’t interested in what they had to offer..

So I got over my uncomfortableness at feeling like I was “putting people out” and started saying Yes.. To just about everything… and it has made a heck of a difference – and I’ve had some amazing experiences and gotten to know some wonderful people).

So off we went to his brother’s house.. Both John and his brother were born in the atlantic coast of Colombia, even though they have spent most of their lives here in Bogota. So, in a salute to their costeno heritage, they were cooking some delicious cuts of meat – using a smoking technique called al trapo..

Don’t worry, while I may have been too busy enjoying myself and talking to everyone to take pictures of all the members of the Gonzalez family – I did manage to get lots of food pictures..

My neighbor is one of five siblings – and three still live in Bogota. He and his wife, Brenda have six grown children, who all live nearby.. So it was a fun gathering of some very nice people, who all love each other a lot. Mr. Gonzalez brother, Richard was doing the honors cooking the meat with one of Mr. Gonzalez’s sons.

So first you dampen a piece of linen or loosely woven cotton cloth in wine.. Red wine, preferably, but any wine will do. It just needs to be moist, not dripping.

Cook the meat for 20 to 30 minutes. When the roll is removed, it will look crusty and burnt, but it will be juicy and delicious inside. Cut the fabric and the strings.

After the covering has been removed, let the meat rest for five minutes before slicing and serving.

There was a bevy of other delicious things to eat.. I took pictures of some of my favorites

There was a delicious mango salad, with lettuce, pineapple pieces, mango chunks, and raisins. I don’t know what the dressing was – but it was delicous and mild enough not to overpower the delicate flavors in the salad.

Besides enjoying all the delicious food and drink, we had a lovely time. John and Brenda’s kids are a lively, good-natured bunch.. I wish I would have gotten more pictures at the time..

At midnight,, everyone including the sweet little grandkids gathering in the living room to watch the little ones open a few presents.

Then we played some games, chatted and the adults enchanged secret friend gifts.. (They did charades during the gift exchange, so you had to guess who the gift was going to..) Danced a little bit – enjoyed some jokes.. and then it was time to go home..

All and all a lovely time, with a charming family, celebrating Christmas here in Colombia.. 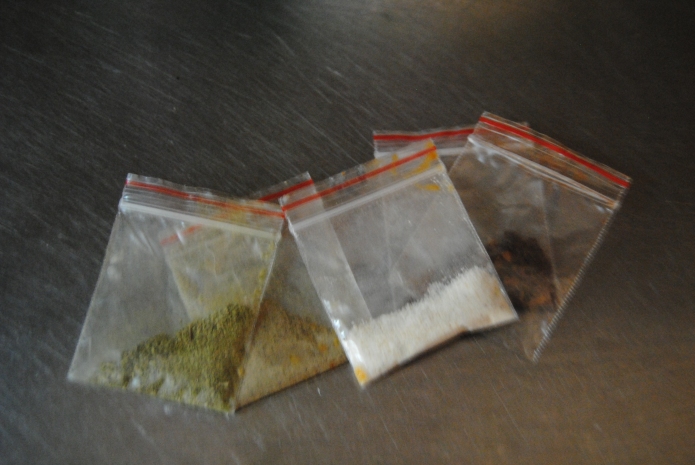 There is a phenomena of “tiny little bags” here in Medellin.  For the uninitiated, these bags carry a sinister implication.  However, the truth is (sometimes) much more mundane.

While these bags are often used for nefarious purposes (just check out the “Park of the Journalists” (parque de la periodista), these bags are also utilized in much more innocuous ways. 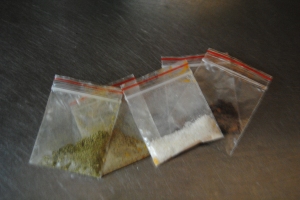 For instance, the tiny little bags from the picture here are actually from a pizza delivery last night. The bags contain a selection of spices including oregano, garlic powder, salt, red and black pepper.

Just an example of the little differences here that sometimes lead visitors to jump to the wrong conclusions due to Medellin’s reputation.  So the next time you see a tiny little bag littering the street – maybe it’s the remnant of a drug transaction – or maybe it was just lunch.