Some of you may notice that I have temporarily changed my header – to show Bogotá’s castle.  I found it the other day as I wandered some of the carerras.  (Residents of Bogotá know that once you get into the single digit carerras – all logic and inference regarding standard directions goes out the window.)  Once you cross Carerra Septima (Cra. 7) the lovely city layout that makes Bogotá such an easy place to navigate changes into a labyrinth of twisting, winding streets reminiscent of San Francisco..

It’s part of what makes the city so interesting – and at times (such as yesterday, when I was making my way to an appointment) – a bit frustrating.  Just when you think you ‘know’ the city – you stumble upon something completely different from what you were expecting.. 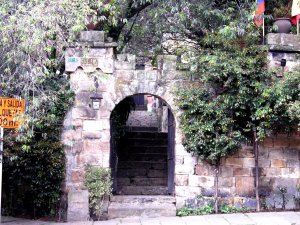 Not what I was expecting

The castle which is located at Cra 3 – 74 was the brainchild of Dr. Juan Osorio Morales and is called Castillo Mono Osorio.   While it has the appearance of antiquity, it’s actually only about 100 years old. 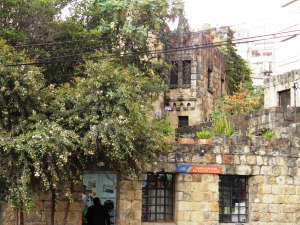 The creator, a local eccentric – was  Colombian cultural attaché to Brussels.   Upon his return to Bogotá, he spent the next twenty years creating the castle which later served as home to his own personal theater troupe.

Like the work of many unconventional artists, after his death the castle fell into disrepair until it was rescued in recent years by one of his descendents and repaired to its current state.

It currently houses several stores including a banquet space, a gift shop and a pharmacy.  Best of all – there is currently space for let.  A new, whimsical office, anyone?