cobblestone streets in the historic district of Cartagena, Colombia

Summit of the Americas – Cartagena, Colombia

As anticipated, President Obama is receiving some harsh criticisms for the Cuban embargo begun by fellow democrat, President John F. Kennedy in October of 1960.  (Despite the long-standing embargo, the United States remains the fifth largest exporter to the island nation.)

This embargo, which was initiated in response to the Cuban nationalization of private properties as part of the institution of a communist regime, reached full strength in February of 1962, and has continued unabated since then.  In fact, the American embargo was re-affirmed in 1992 with passage of the Cuban Democracy Act, and again in 1996 with Helms – Burton Act which further prevents private American citizens from having business relationships or trade with Cuba.

At the summit, the host of the event, President Juan Manual Santos (Calderon) has been one of the more outspoken critics of this on-going trade policy and public relations nightmare.  President Santos argues, fairly successfully in my opinion, that not only is the embargo an outmoded method of diplomatic negotiation, but that is has been an ineffective one (in inspiring governmental and philosophical change in Cuba.) 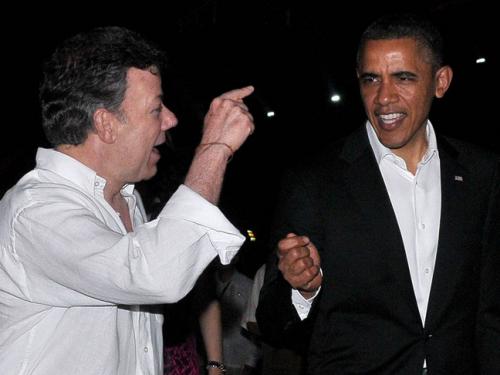 This comes after President Obama was embarrassed by a prostitution scandal involving several of his private security detail.  At the time of this writing, eleven members of the secret service along with five members of the military has been openly disciplined, and returned home.

Colombian prostitutes – photo found at multiple sites, including another wordpress blog and http://azizonomics.com/tag/colombian-prostitutes/
(If this is your photo – let me know, so I can give proper credit)

Protests against the United States have been small scale and without injury as small explosives were detonated near the American embassy.

President Obama also fielded criticism on America’s ‘War on Drugs’.  While conceding that the efforts have been a multi-billion dollar failure (with the exception of small scale victories such as the capture/ death of Pablo Escobar in 1994), Obama refused to consider efforts to legalize drugs, as are under discussion in several other nations.

In other news – in a surprise move that may predict more future instability for Venezuela, President Hugo Chavez has decided to forgo the summit as he pursues treatment for cancer (in Cuba).  This move leads to intense speculation regarding both the presidential and governmental prognosis in Venezuela.  Previously, President Chavez had been adamant that his cancer was curable and disputed reports of a more serious condition. There are now several media reports that the president has widespread metastasis affecting multiple organs.  (May I suggest that you consider HIPEC, President Chavez?)